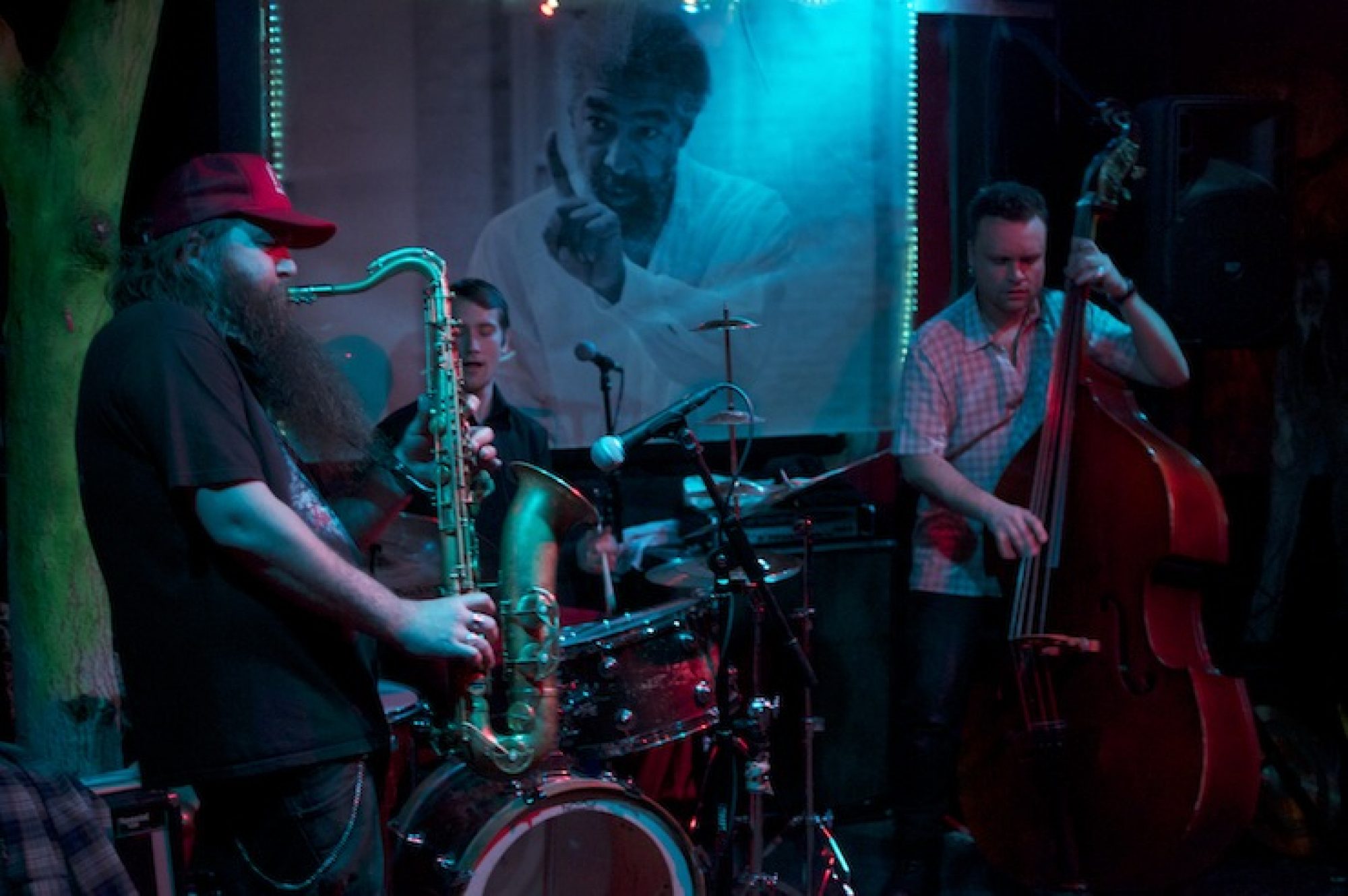 Nublu in New York’s Lower East Side fittingly epitomizes the phrase ”underground club space”. Preoccupied passers-by will no doubt walk right past the venue’s modest doorway over which hangs a somewhat surprising painting of Charlie Chaplin. On Saturday, January 10, a handful of jazz loyals trekked to Avenue C in spite of the unusually breezy winter weather to catch a trio of Finnish performers under the heading of ”New Cut! – Jazz from Finland”.

”As a noted venue for experimental music right at the heart of East Village, Nublu was an obvious choice for the second night of ‘New Cut!’. The place is run by Turkish sax player Ilsah Ersahin who is known from his Istanbul Sessions ensemble”, explains Annamaija Saarela, the coordinator and producer of the Finnish jazz showcases at ”New Cut!”.

The dynamic duo of legendary New York drummer Andrew Cyrille and Finnish sax great Mikko Innanen opened the proceedings with an intense set of improvised music. Innanen, no stranger to the New York scene after recently organizing a series of concerts there, communicated with Cyrille in a lovely sonic dialogue, which found the duo in a slightly more compact and straightforward form of expression when compared to their recent Helsinki performance. As always with improvisers of this calibre, the room hosting the concert lives and breathes in their music along with the audience.

”I love playing with Andrew”, Innanen says. ”To me, he embodies both the history and the future of jazz music. Playing with him, it all comes down to living in the moment and reacting to it. It’s great that he accepts younger musicians as equal creative partners at 74 years of age and with his enormous wealth of experience.”

”Nublu is not a pure jazz club but still a noteworthy institution in the New York scene. The musical palette of the venue is versatile and the atmosphere is decadent in just the right ways”, Innanen explains. ”I was surprised to hear that this was the first time Andrew Cyrille was here. It is also typical for New York that the most important places for musicians to play at and to go to change all the time.”

Rakka from Tampere combines Eastern tones and misty melodies with their local heritage in their music brimming with tasty compositional hooks and the underlying sense of swinging. Taking the stage after Cyrille and Innanen, the quintet presented a setlist lifted mostly from their latest offering, ”Mykorritsan Valtakunta” released in late 2013 by Lumpeela Julkaisut, one of Finland’s most far-reachig independent labels. Instead of dancing, an equally likely option, the public mostly opted for highly concentrated listening, fitting well to the mystic mood of the Rakka performance. Compositions such as ”Citykettu” (Finnish for ”The CIty Fox”) proved that the ensemble is increasingly becoming a force to be reckoned with.

The final performance of the evening came courtesy of Black Motor, one of the most hotly-tipped export items in the Finnish jazz catalogue circa 2014. The recent sets have found Black Motor prepare for their upcoming release by introducing a host of new compositions taking the groups enticing live dynamic into new, and often delightfully unexpected, directions. Here, the trio performed a no-nonsense collection of their best ”fire music”, taking Nublu by a storm easily equalling the sudden influx of snow on the New York streets outside of the venue.

”We immensely enjoyed playing the show here”, confirms Black Motor drummer Simo Laihonen. ”After playing at Brooklyn’s Shapeshifter Lab the night before, Nublu felt more immediate and responsive as a venue. This also influenced our way of performing, and I think all of the bands were full of energy at Nublu.”

While Laihonen does not view the US as a special priority for the band, he states that the band’s urge of playing outside of Finland is increasingly influencing the planning of the Black Motor schedule for the near future.

”Even though every gig wouldn’t bring in the most important contacts on a given country, the band still always gets a boost of taking this music abroad and presenting it to the people. It’s a matter of taking small steps, one at a time.”

”New Cut!”, presented during the time of New York’s annual Winter Jazz Festival, albeit outside of the official event programme, surely offered the New York public a well-informed glance at what is happening in Finnish jazz. In a busy jazz city such as New York, every club promoter faces the task of trying to rise above the massive amount of potential jazz gigs filling up the metropolis’ daily itinerary.

”I’m very happy that a lot of important music journalists, distributors and festival promoters working in New York made it to these events”, Annamaija Saarela says. ”Of course there were also a couple of Finnish tourists happily cheering for their own.”