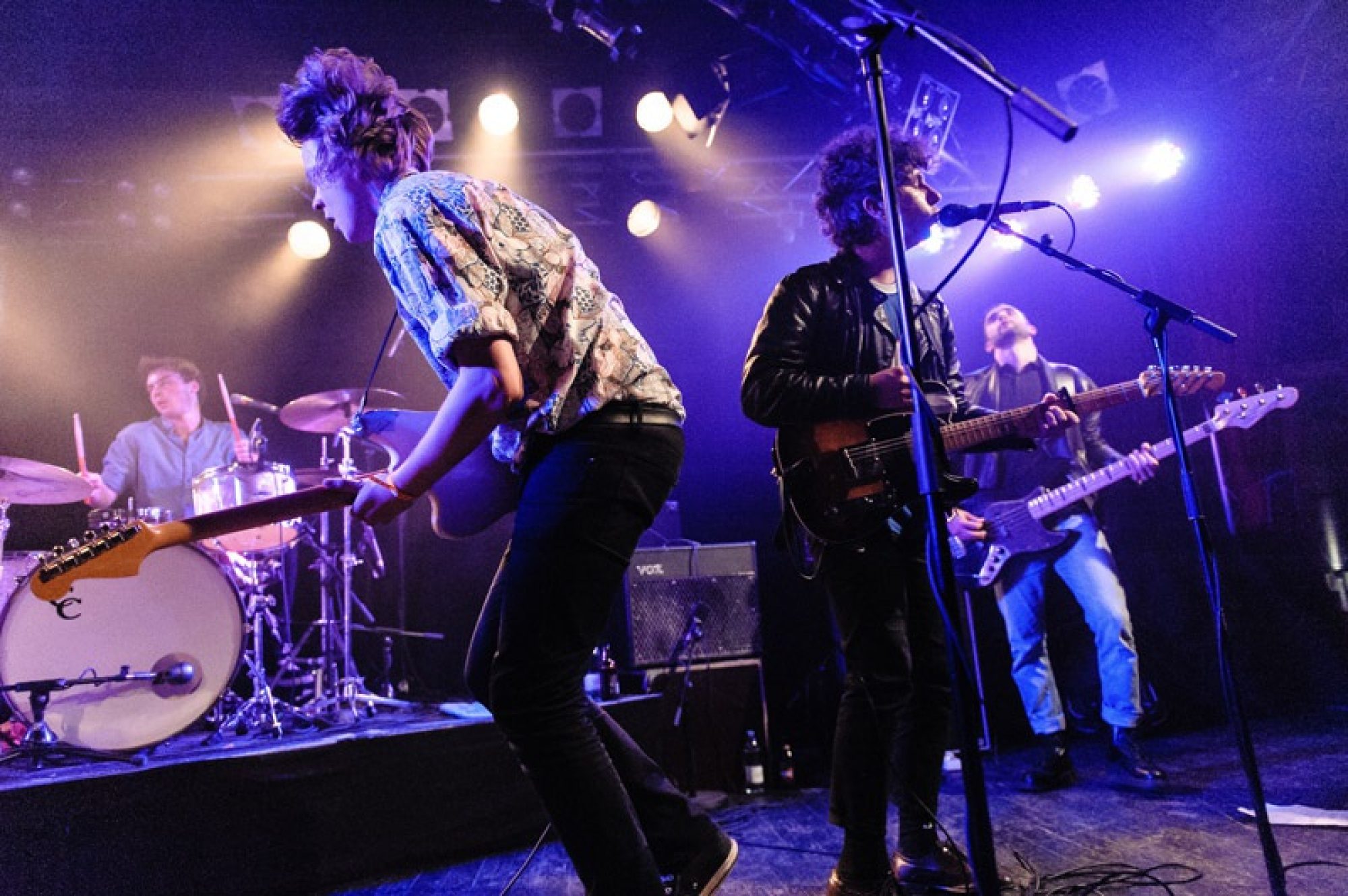 First off, don’t spend time wondering about the name. This band has nothing to do with France or cinema. It does have a lot to do with surf music, garage rock and the poppier side of Joy Division and New Order. And hooks catchy enough to land a shark.

Working with simple, honest tools – jangly guitars and vocal harmonies – French Films are enjoying a meteoric rise. They notched up 100 live shows around Europe and Japan within six months of releasing their debut album, an unprecedented feat for a Finnish band.

Their international assault began in an unlikely setting: war-torn Skopje, Macedonia, just over two years ago. For five lads of about 20, just the fact of getting out of Finland was a buzz.

“We were even psyched about switching planes in Vienna ‘cause we had some extra time to spend there,” recalls the band’s main singer and songwriter, Johannes Leppänen, 23.

“We got out of the airport, bought some beer and hung out next to a motorway, just happy to be somewhere else. It was a pretty good show in Skopje the next day, considering it was maybe our ninth time on stage.”

Johannes and the band’s other guitarist, lead singer and songwriter, Joni Kähkönen, started the outfit in early 2010. French Films was born – and named – based on a chance post-cinema meeting on a pub terrace, discovering a love for the same bands.

Joni, from the sleepy southern town of Järvenpää, had played drums in black metal and punk bands, but never sung or played guitar properly before.

Johannes and drummer Antti Inkiläinen had started a garage band at their school in the leafy Helsinki bedroom community of Espoo back in 2004. Dubbed Today’s Special, they released a 2009 EP on Gaea, the label that is now home to the Films.

Joni and Johannes collected a few other former band mates and bar mates, including Santtu Vainio, who was encouraged to play keyboards though he never had before.

Four months later, they were in the studio at a music technology college where Santtu studied, laying down the four-track Golden Sea EP in three days.

The title track was a shimmering bit of indie pop with a rockabilly guitar, a New Order bass line, vocal harmonies and a catchy synth riff whose charming simplicity betrays Santtu’s lack of experience. It began to quickly attract attention online.

By the time their debut album Imaginary Future came out in September 2011, they’d already played their energetic, danceable guitar pop in nearly a dozen countries. The album soon garnered favourable reviews from the likes of Fake Plastic Tunes and Pitchfork.

Many listeners heard echoes of the Smiths, Echo & the Bunnymen, the Cure, Big Country and even Haircut 100, not to mention more recent kin such as the Strokes and Franz Ferdinand.

Johannes is “not surprised” by comparisons to new wave and post-punk bands. “We do like many of the 80’s bands and their sound. Then again, we love bands from the ‘60s, ‘70s and ‘90s and they inspire us at least as much,” he says.

“I watched a lot of skateboarding films when I was a kid – and still do! They usually have really cool music in them from all decades. That’s when I started to find out about all this great stuff.”

French Films has brought that full circle, appearing briefly in a friend’s skateboard movie and contributing a track to a Billabong surfing movie alongside Stiff Little Fingers and Black Lips.

No sleep till Osaka

Within three months of the album’s release, the group was touring Japan, where they were astonished to find diehard fans.

“We travelled to Osaka by train, dead tired from jet lag and staying up the night before in Fukuoka. I was about to collapse. When we got to Osaka there was this guy waiting for us outside the station, asking for autographs. This guy had no way of knowing what time we were arriving or that we were even travelling by train. He’d been there waiting the whole day, hoping we didn’t come by bus or car. That gave us so much energy that we were back on track again and played a really fun show that evening.”

Their next fun show should be at London’s Notting Hill Arts Club on 22 November, when the first punters in through the door will be handed a limited-edition split single featuring French Films and fellow guitar-popsters Big Wave Riders. The gig will be the band’s second featuring new bassist Tuomas Asanti, who joined the ranks in October.

Don’t be surprised to hear quite a different band onstage compared to the bright innocence of their album, which is already so last year for this fast-morphing band.

The live sound is rougher and punkier now, as evidenced by a new song, “When People Like You Filled the Heavens”. So far it’s only available as a slightly disturbing video (in line with that for the band’s catchy older tune “You Don’t Know”).

Leppänen promises that the second album, out in the spring, “will sound older, rougher and a bit darker than the previous one. It was recorded with a different style, as analogue as possible. We didn’t care about mistakes so much this time.”

Meanwhile the fivesome’s burgeoning reputation around the continent has not gone unnoticed by the powers that be.

In October, no less than the European Commissioner for Culture named French Films alongside Emeli Sandé as winners of the 2013 European Border Breakers Awards – an honour that’s previously gone to Adele, Lykke Li and The Darkness.

The boys will be handed their awards by Jools Holland and perform as part of a Europe-wide TV broadcast from the Netherlands on 9 January – nicely setting the stage for their second album in February or March.

Status network releases report on art music in the Nordics

Today, the collaborative network STATUS has released the findings of an investigation into the environment and...
Music Finland, 21.9.2022
News / World & Folk