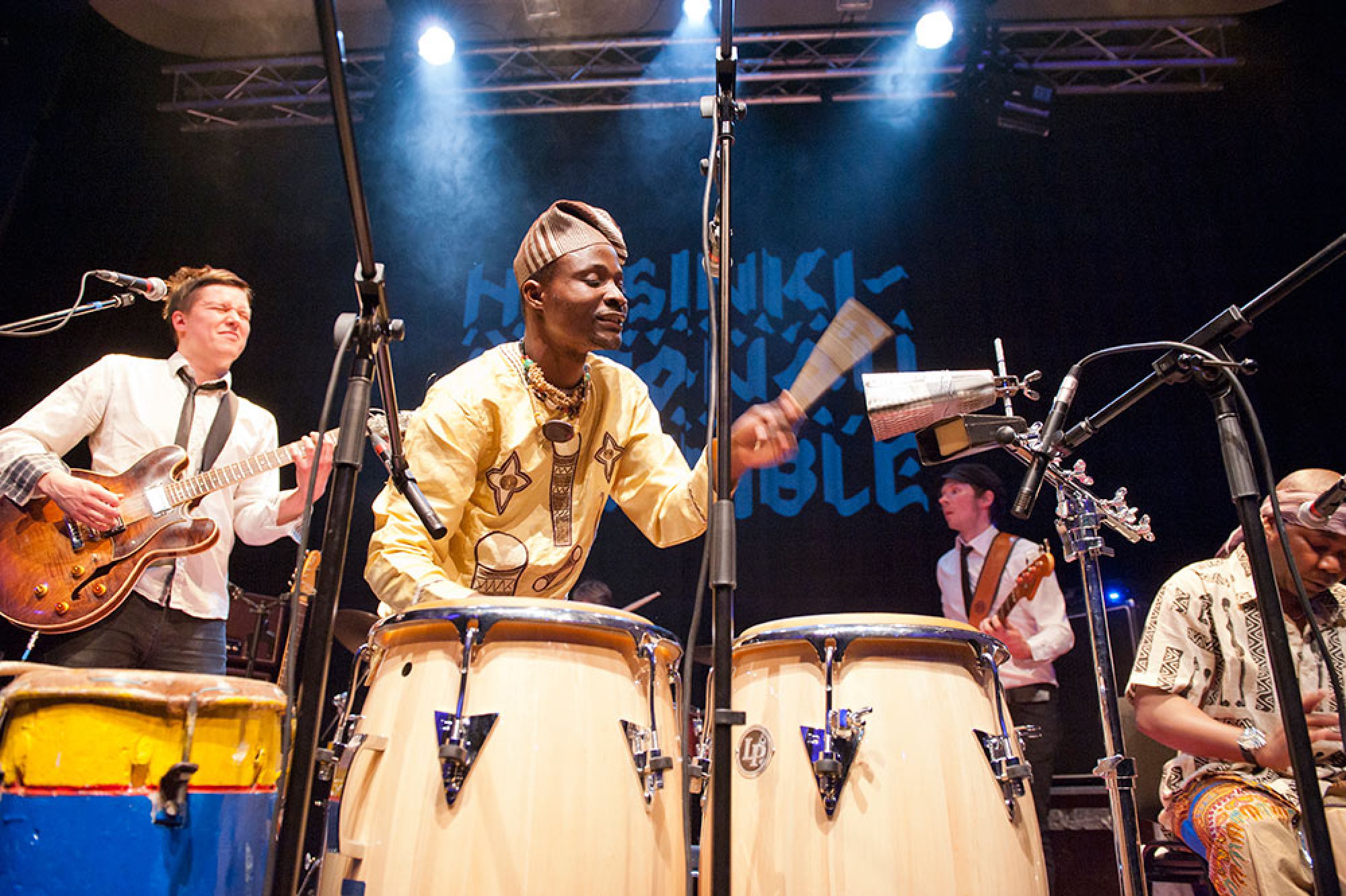 Villa Karo, the Finnish-African culture centre in Benin, is a gateway and a nexus for many kinds of arts collaborations. One of the advanced music projects it has fostered is the Helsinki-Cotonou Ensemble, whose original blend of African and Finnish rhythm music has been extremely well received. The eight-member group released its second album Fire, Sweat & Pastis in autumn 2014; it entered the World Music Chart and was named Folk Music Album of the Year in Finland.

Guitarist Janne Halonen from Helsinki went to Villa Karo in 2009 with a specific mission: he wanted to learn traditional voodoo rhythms, having been inspired by jazz guitarist Lionel Loueke from Benin among others. On his very first trip to Benin, he met a local musician named Noël Saizonou.

“It was like opening Pandora’s Box!” says Janne Halonen. “The more I rooted around, the more interesting it became.”

Singer and percussionist Saizonou is a consummate professional musician who has worked with Finns before. “Music is an inseparable part of everyday life in Africa, not at all like in Finland; everyone plays an instrument and sings. But true virtuosos are few and far between, both here and there.”

The two gentlemen began to work on their collaboration patiently and were soon joined by bass player Sampo Riskilä and drummer Juha Räsänen. In 2012, they all went to Benin together. “We rehearsed, recorded and performed, and we liked what we were doing,” says Halonen. They did not release their debut album until a year after recording it.

“We hastened slowly. Many performers just push out a disc and then hope for something nice to happen.”

On tour and on the recording, the ensemble was joined by musicians from Benin, including the Ahouandjinou brothers. They taught the band a lot about phrasing and sounds and how voodoo rhythms can be used in many different ways. “You can have a precisely defined style even if you don’t care for genre boundaries at all! Sometimes their band would play traditional stuff and sometimes very modern jazz. In the West, we are so keen to pigeon-hole things. Back home, we’re always asked whether we play instrumental music or whether we include singing, or jazz solos, or what have you... People want to be so clear about what you’re doing!”

The music for the Helsinki-Cotonou Ensemble is written by Janne Halonen and Noël Saizonou. fRoots magazine described their music as “Weather Report meets Fela”. The group sings in English and Gun. “Not many people even in Benin can understand our lyrics,” says Halonen. “Only a few people speak Gun; the official language is French.”

The group recorded their second album in Finland in 2014. By then, they had performed a lot together and had established a house style. “We went into the studio and recorded the tracks in a couple of takes each, but we spent a lot of time polishing the sounds.”

Running a large band on two continents is naturally quite a challenge. At the time of this interview, the group is again struggling with their visa applications.

“The bureaucracy was really the biggest culture shock of all. I didn’t use to understand just how great the inequalities between people in the world can be.

“If there are any cultural differences within the band, then certainly the divide does not run between black people and white people! We’re a group of individuals, each with our own strengths and weaknesses. But in making music everything has been easy for us.”

Four seasons: Composers in the spotlight

In our first edition of Composers in the Spotlight series, we feature Sebastian Fagerlund, Sauli Zinovjev and Ilari Hylkilä, the...