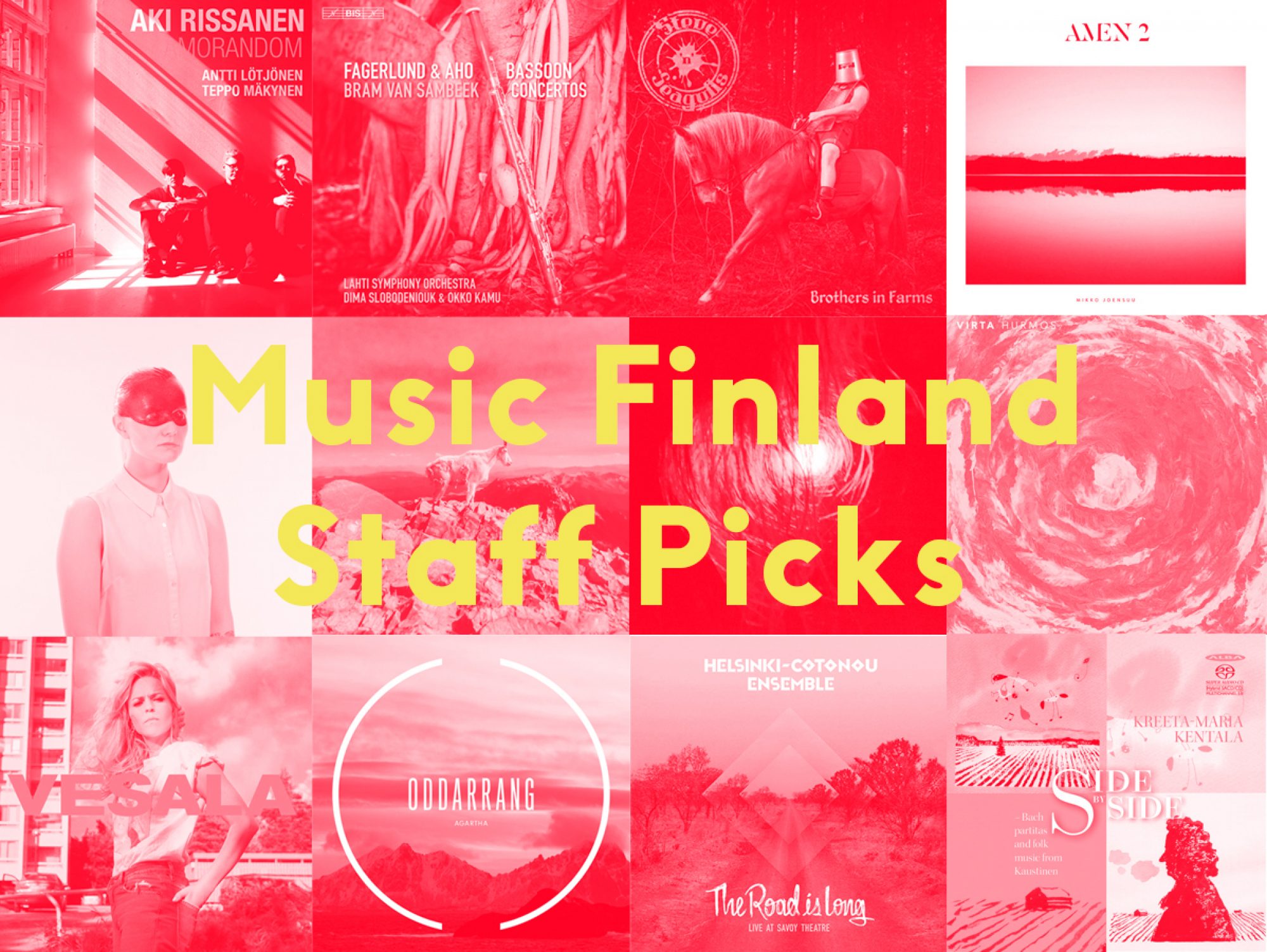 Another elegant album with Kaija Saariaho’s music full of mystery, fragility and an amazing range of colours. The superb and passionate players of Meta4 are perfect interpreters of Saariaho’s music – both collectively and individually. Soprano Pia Freund shines in the chamber songs also heard on this record.

Oranssi Pazuzu just keeps on refining their sound through the years, and further combining the two attributes I tend to look for in music: quirkiness and gloom. On Värähtelijä the band is even more unconventional than before, with ambitious combinations of bizarre soundscapes, warped psychedelia and eerie moods.

Magnus Lindberg is definitely one of my favourite contemporary composers. His orchestral music of the 2010s appeals to me by being powerful and emotional yet not predictable or cheesy at all. This recording of the Finnish Radio Symphony Orchestra and Hannu Lintu include Lindberg’s works Al largo, Era, and Cello Concerto No. 2 with Anssi Karttunen as a soloist.

Liima consists of members from the Danish trio Efterklang and Tatu Rönkkö (known from Auteur Jazz, Elifantree and Skalle & Sharon, among others) and their debut album ii was released worldwide by 4AD Records. Liima may be only 25 per cent Finnish in personnel, but percussionist Rönkkö's spastically grooving rhythms make all the difference in the band's sound. Their sound could be described as electronic indie pop, but the foursome has quite an experimental, boundary-free and unique approach to the genre, and Liima's rogue spirit really comes to life on their live set. Things are looking up for Liima this year too: they are already in the studio to record a second album.

Taking influences from modern electronic and classical music as well as atmospheric post rock, Oddarrang is one of the most interesting bands in the Finnish jazz scene. Agartha, fourth album of the quintet, balances between majestic and fragile. With dynamic, yet subtle arrangements Oddarrang blends their diverse influences into beautiful, cinematic soundscapes.

VIRTA’s music has been described as post-jazz and the term is quite accurate when it comes to this trio’s musical material. Their aptly named second album, Hurmos (closest translation maybe being ’trance’), is an experimental combination of jazz, electronica and post-rock – an intensive 50-minute creation of seven electro-acoustic pieces. Although intense, the album does not lose its nonchalance at any point. Virta's soundscapes are dominated by electronic sounds and modern production, but the humanity is present at all times. Hurmos flows forward in a seemingly effortless way, but that is only surface. The album is so rich, clever and insightful that with each listen you are sure to "get" a little more. The skillful trio has succeeded in creating an exhilarating, dynamic and modern album with a beautiful touch of humanity.

Kreeta-Maria Kentala: Side by side – Bach partitas and folk music from Kaustinen (Alba)

Would you have thought that J.S. Bach and Finnish folk tunes have something in common? The inventive violinist Kreeta-Maria Kentala proves this true by combining Bach partitas with folk tunes from Kaustinen, her own home town. A delightful and unconventional musical dialogue between two different traditions.

As Mikko Joensuu released not one but two albums last year, it was difficult to decide which one of them would be the best album of the year 2016. However, in the end the second album, Amen 2, of Joensuu’s 'Amen trilogy' won me over.

Like the title says, this is a tribute album to the distinguished and well-liked double bassist and composer Teppo Hauta-aho.

Lake Jons’ Explore EP is in my opinion one of the best releases in 2016. I enjoy the guitar sounds, fun rhytmical patterns and most of all the wonderful vocals. Explore EP is true to the mystic Lake Jons sound, which originally caught my attention and kept me listening to their songs.

„Gut Ding will Weile haben“ (A good thing takes time) as we say in German, and this is certainly the case for the second True Black Dawn album Come the Colorless Dawn that was released 15 years after the debut. This work is one of the (Finnish) black metal highlights of 2016 – and it has been a good year for the genre with great releases by e.g. Baptism and Kyy as well. But if I have to choose only one album, it's Come the Colorless Dawn. It brings you black metal that is traditional but avoids being boring and meaningless, but instead creates a dismal atmosphere that sounds timeless, gritty, intense and enticing.

Tired of darkness and gloom, had enough of all those tunes in melancholic minor? Here comes an invincible prescription for the dark season despair. Helsinki-Cotonou Ensemble’s new album The Road is Long is a top-notch achievement, a truly solid live recording with exhilarating soundscapes. This eight-piece group combines the best Finnish jazz-funk forces with the energy of two Beninese masters Noël Saïzonou and Menard Mponda. Guitarist Janne Halonen and percussionist-vocalist Saïzonou compose the music, which highlights the unique tradition of Benin – a mix of afrobeat, voodoo rhythms and European horns from the French colony era. Listen to the album and go experience this band live: it is a real sunshine-packed shot in the arm.

Helsinki-based The Hearing, alias Ringa Manner, released her long-awaited second album Adrian in April via Solina Records. Known for her loops and live mixes, The Hearing combines dreamy pop with catchy vocal lines underscored by resonating beats and heady synths in her music. Definitely one of the best indie-pop albums of 2016!

The highly anticipated solo debut by Paula Vesala charmed me and exceeded my expectations. She is known from PMMP, one of the biggest pop sensations in Finland over the last decade, whom I respect highly. Vesala is lyrically interesting, honest and there’s just the right amount of Finnish melancholy and some experimentalism for a pop album. Paula Vesala is an amazing lyricist, not only on Vesala, but has written great songs for many other Finnish artists too. I also love that she was the Executive Producer for the album – and chose some great co-producers too.

Amorandom is pianist and composer Aki Rissanen’s first piano trio album. Together with fellow musicians Antti Lötjönen and Teppo Mäkynen, Rissanen embraces the unexpected and draws influence from various styles and directions. The music was originally composed to an animation film and the cinematic feel is present on many of the album’s tracks. Especially the hypnotic, minimalistic compositions stand out and show the group’s ability to effortlessly explore styles and move from one mood to another.

Excellent debut album from a young, talented female artist and songwriter with major pop hits that Finnish music lovers will sing-a-long for many decades!