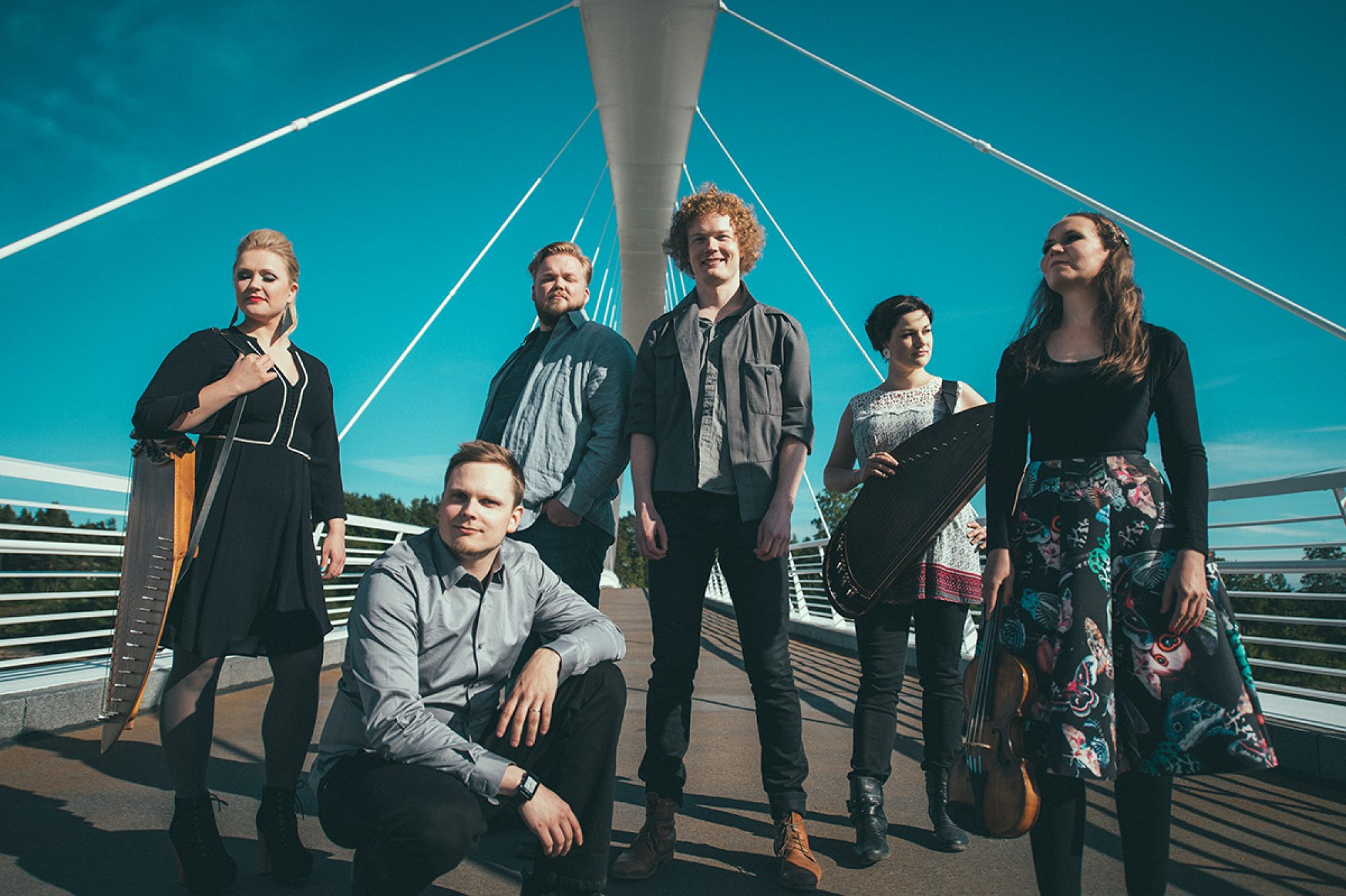 Finnish folk music is endlessly fascinating – but let’s face it – often fairly grim. Chalk it up to those long dark winters that shape one of the world’s northernmost nations. Try to forget whatever you know about its folk tradition and listen to Okra Playground’s debut Turmio with fresh ears. Because this is fresh and cheery.

On first listen, you may be reminded of Värttinä, Finland’s most successful world music band, who’ve been touring global festivals for a quarter century. True, both groups feature three high-energy female singers with male instrumentalists behind them onstage. All six Okra Playgrounders are equal partners, though. All are virtuoso instrumentalists but share the spotlight, maintaining a tight focus without meandering solos.

And true, some Okra songs tap into the same ancient Karelian tradition from eastern Finland, though the band hails from Helsinki. Here too there are heroic tales of Väinämöinen from the national epic, the Kalevala, and a warning about a smooth-talking charmer seducing village women in the lead-off track, “Kaunokieli (Silvertongue)”.

That’s where the similarities with older bands end, though. With Okra Playground, the tradition takes a technological leap into a scintillating mix of electronics and acoustics, catchy pop hooks and worldbeat spice.

There’s nearly a metal edge to “Kun mun kultani tulisi (If My Beloved Shall Come),” a slow-building soundscape featuring snakes, tombs and passion beyond death. All through, there are spine-tingling – yet ear-friendly – three-part harmonies, integrated into unusual instrumentation.

The rhythm section of percussionist Tatu Viitala and electric bassist Sami Kujala look like they’ve stumbled in from an indie rock band. Actually, Kujala, who resembles a young Roger Daltrey, plays in a party covers band with accordionist-keyboardist Veikko Muikku. He and his wife, the band’s singer, kantele player and composer Essi Muikku, met in another band before she came up with the idea of Okra Playground in 2010.

Singers Maija Kauhanen and Päivi Hirvonen, meanwhile, also perform solo and at times as a duo. Kauhanen plays the national instrument, the kantele, while Hirvonen plays the equally traditional jouhikko (bowed lyre) as well as fiddle, and they both write songs for the group.

“Some of the lyrics are old, but we change them a bit, and we’ve started to do our own texts based on this tradition. Overall, it’s more from us than from the tradition,” says Hirvonen.

Most of the band members met at Helsinki’s Sibelius Academy, and developed their songs over several years, “but they were a bit different then, more acoustic,” she explains. The group started working on the album in 2014 with producer Sami Kurppa.

“We didn’t exactly give him a free hand, but we wanted to move this to the next level. And we’re very happy with what he did, including some programming. We bring some of those electronic things into the live shows. But we don’t actually have enough hands, so there are also some loops, samples and backing tracks, too,” explains Muikku.

Muikku notes that the kantele players use effects pedals, which are easy to integrate because contemporary kanteles have contact microphones, and can be played standing up.

“But the violin, jouhikko and accordion are purely acoustic. We wanted to keep it that way so you can really hear the acoustic sound mixed with the electronic,” says Muikku.

“All of our most subtle things don’t work in a live situation. You may not be able to hear them, especially in a bar gig. So you have to make it a bit more simple and raw.”

That was certainly true in August when the band played their first foreign gigs at Norway’s Nordsjøfestivalen, just after wowing crowds at Helsinki’s Flow Festival.

“Norway was a trip back into our roots, because one of our shows was an acoustic set. We didn’t have time for a soundcheck, so we just decided, ‘well, let’s do it acoustic’. And it worked fine. The other one was a bar gig at a brewery, so people were having fun. They were like, ‘woo-hoo, this is great,’ partying and dancing,” recalls Hirvonen with a grin.

Isn’t that distracting during the quieter acoustic songs?

“Not at all. If people feel like partying during a ballad, then go ahead! It doesn’t bother us or ruin our concentration,” she says. “We know exactly how we want the songs to sound.”

Oh, one more thing: does the band’s name refer to a tropical vegetable?

Hirvonen chuckles and says: “Well, why not? For me, though, I think of the colour ochre. Kind of yellow-orange, like the leaves in the autumn, which are beautiful, mystical, playful, as I think our music is.”

As to the rest of the name, Muikku points out that “the band was originally a playground for us – and still is.”

Okra Playground perform at the WOMEX 16 World Music Expo in Santiago de Compostela, Spain, with a late-night showcase on Thursday 20 October 2016 at the 700-seat Auditorio Abanca.

Listen to Turmio on Spotify: