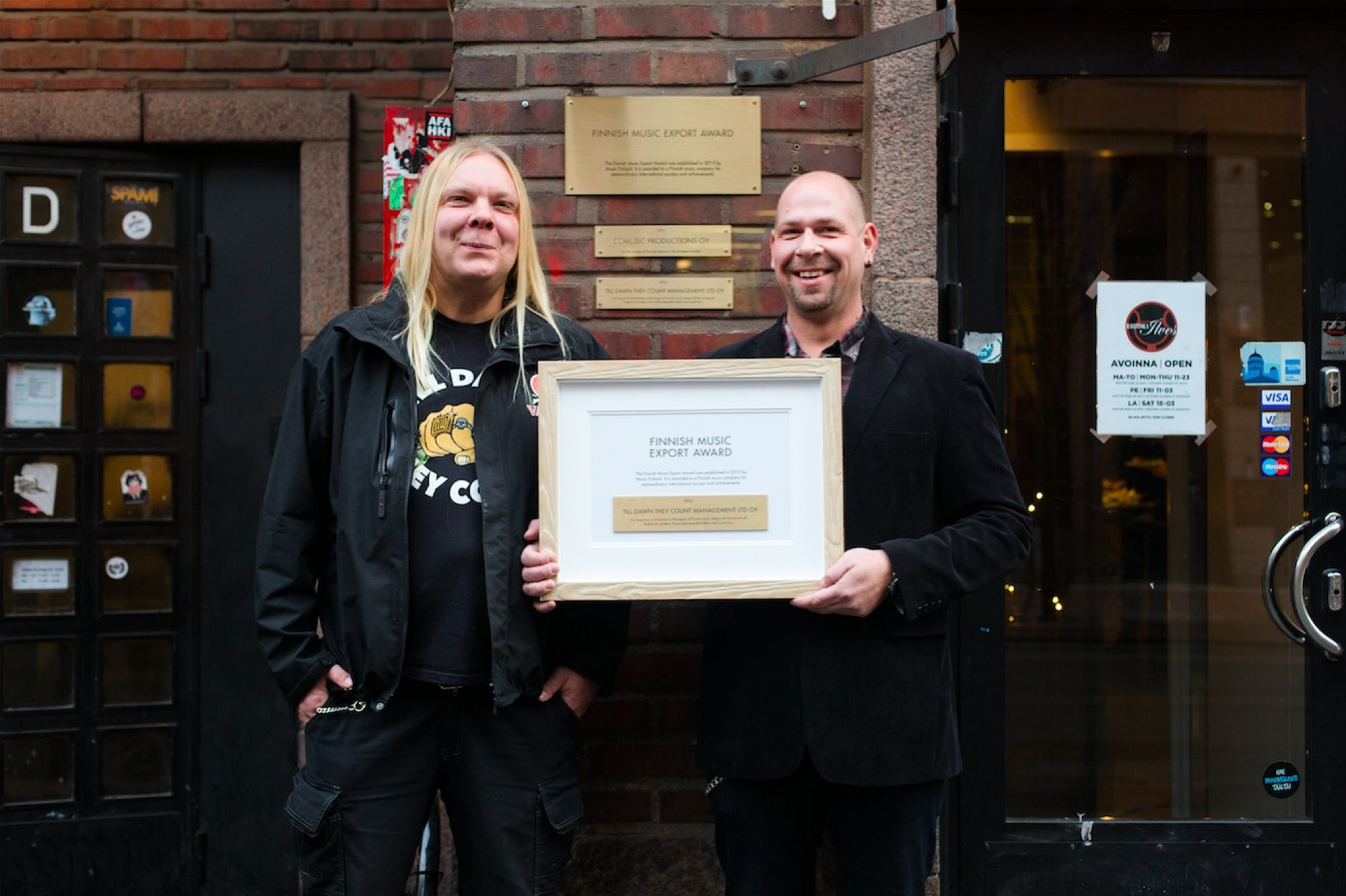 The Finnish Music Export Award was awarded to Till Dawn They Count Management Ltd, whose best known client is Nightwish. The award was handed by Chancelor Jari Gustafsson (Ministry of Employment and the Economy) in Helsinki today.

The Finnish Music Export Award, established by Music Finland last year, is a recognition given to a Finnish music company that has successfully developed and expanded its international operations and has shown pioneering spirit in exporting Finnish music. The intent behind this award is to create attention to the important work done by music export companies, and also promote these active and growing enterprises. The award was initiated by Music Finland, who also gathered the jury together. The award winner receives their own signboard on the outer wall of the famed rock club Tavastia in Helsinki.

The award-winning company, Till Dawn They Count Management was founded by longtime Nightwish partners Ewo Pohjola and Toni Peiju, when its predecessor King Foo Entertainment ceased operations in 2014. Till Dawn They Count Management has helped build Nightwish to be one of the biggest global metal music success stories from Finland. The company's artist list also includes another major Finnish metal band, Sonata Arctica.

Till Dawn They Count Management’s duties include overall managing operations, which traditionally includes contract negotiations, designing and implementing revenue streams, as well as international tour and album strategies. The company is rewarded above all, for the success of the most recent Nightwish album Endless Forms Most Beautiful and subsequent world tour.

The jury selected the winner by the following arguments, among others:

"Ewo Pohjola and Toni Peiju are pioneers in music managing and Finnish music exports. They have been an integral part of Finnish metal’s success story by introducing a number of acts to the world, through their current business Till Dawn They Count Management, as well as their previous company King Foo Entertainment."

The jury paid particular attention to the company's grip on building long-term artist careers, as well as the ability to help their acts increase their audience year after year.

"The success of Nightwish's latest album and tour are on a scale of their own. The band has once again reached a new level and it represents the cutting edge in the world of metal music. After seeing a Nightwish show, hardly anyone would question the fact that the band has risen to a new vicinity."

The first ever Finnish Music Export Award was given to Comusic Productions Ltd in 2015, whose representative Mikko Saukkonen was in this year’s jury.

Musiikkivientipalkinnon 2016 voittaja Till Dawn They Count Management Ltd from Music Finland on Vimeo.