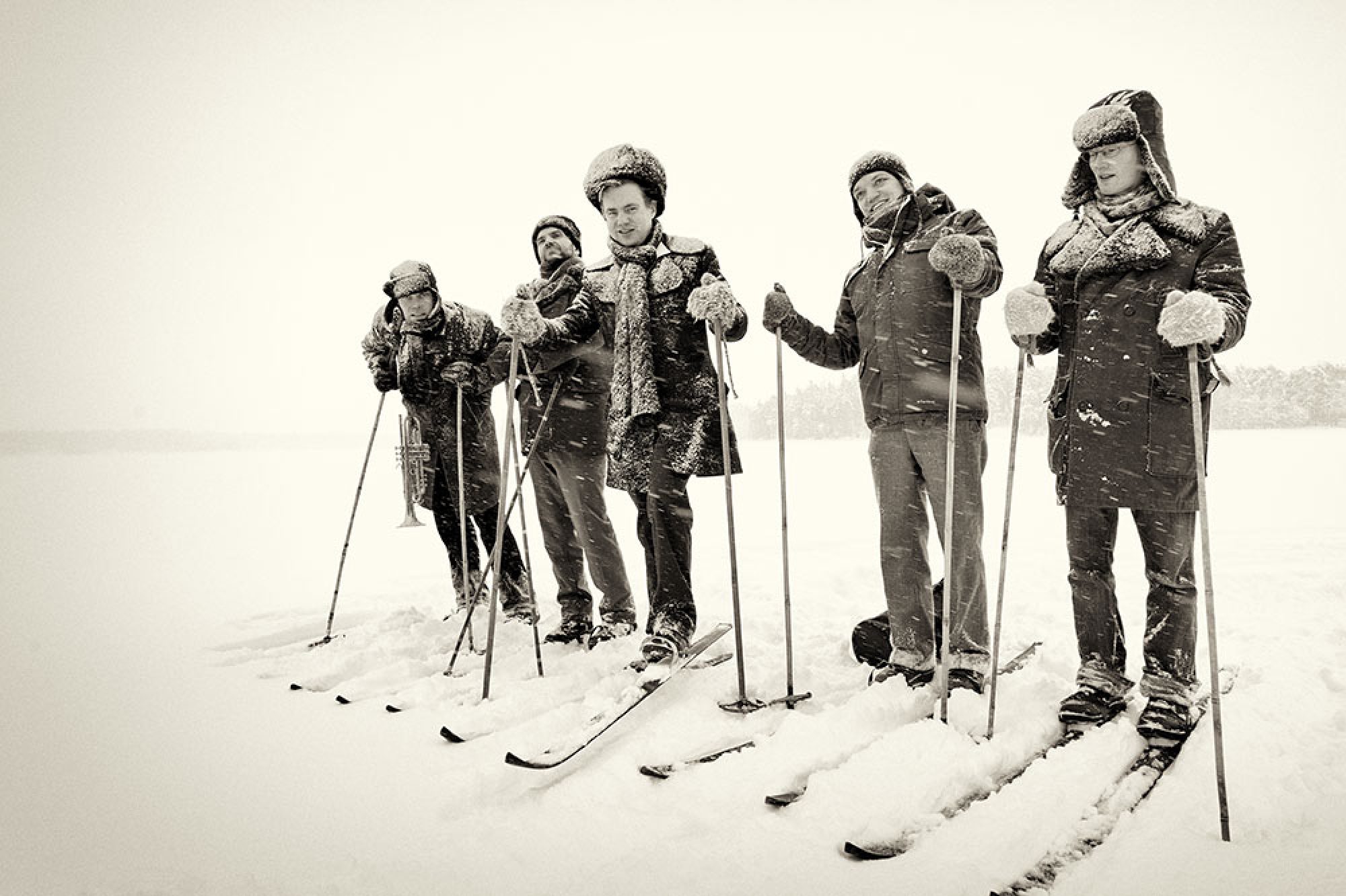 Creators of their own self-defined musical genre, “Lapland-Balkan”, Jaakko Laitinen & Väärä Raha have played a merciless amount of gigs during their six years of existence, released three critically acclaimed albums and gathered a fiercely loyal cult following in Finland. But they have also made headway abroad, performing repeatedly in Scandinavia, Balkan and elsewhere in Eastern Europe, even in places like Turkey and Kazakhstan. Mostly everywhere they go, they make people dance like there's no tomorrow.

Jaakko Laitinen & Väärä Raha was founded in Helsinki at the start of 2009. Jaakko Laitinen (vocals) and Marko Roininen (accordion) had been together in the band Orkestar Business Class, releasing one album of Russian and Balkan trad tunes, some of them as Finnish translations, some sung in the original languages. The band split as Laitinen and Roininen moved from Lapland to Helsinki; there they met other expatriate Lapland musicians and decided to form a new group. Jarkko Niemelä (trumpet, bouzouki), Tuomo Kuure (contrabass) and Janne Hast (drums) had diverse musical backgrounds; Niemelä and Hast had played in the well-regarded and pioneering hip hop group Tulenkantajat.

Laitinen, on the other hand, had fallen in love with iskelmä (the traditional Finnish popular song with lots of influences from romantic Russian songs) as a teenager. Later on, he lived for a while in Hungary, traveled on the Balkan, learnt local gypsy songs (some of which Orkestar Business Class performed) and then started writing his own songs, combining iskelmä with Russian and Balkan influences. In Väärä Raha, he finally had the band to perform these songs with the passion and tightness they deserve.

“Everybody in the group knew each other in some way, having been to same high schools and same bands”, Laitinen says. “So it was easy to find our thing. In the beginning I was unsure if I could make such professionals play the wild and rapturous music I envisioned, but it did work, so well that we have been lots of times called the best live band in Finland. The guys have believed in this from the beginning, and despite their total professionalism, they have been prepared to humbly work at the grassroot level before making it the to the more extravagant stages. Now that we have toured together for six years, doing 80 gigs a year, we have cried and laughed so many times together that a hobby has turned into a job and a way of life.”

From the beginning, Väärä Raha found the stage – any stage – to be their most natural habitat. They could play the punk clubs as easily as respectable folk or world music festivals. Laitinen's songs are about quite basic themes – love, passion, boozing, death and living life to the full before death. But from the beginning, he has had his own way of writing about all this. Most iskelmä tends to be relatively melancholic, even self-pitying. This is often seen as a natural ingredient of the Finnish personality. But Laitinen has a winsome passion and a will to celebrate life even in the moments of disappointment. This is certainly something that has made Väärä Raha's music stand out.

“I love iskelmä deeply, but yes, its ideology is about horrid beaten-down fatalism and conviction that happiness is always somewhere else, either beyond the wide seas, in the arms of a lost love or just in the past”, Laitinen admits. “These lyrics, in all their horribility, have surely formed the Finnish mindscape. I have tried to say quite different things. Maybe it's the influence of Romany music that makes one understand that joy and sorrow in music don't shut each other out. At the same time, one can realize life's horrors and appreciate its sweetness. It's good to have different kinds of emotions in the same song.”

The band released their self-titled debut album on the cult label Helmi-levyt in 2010. The album includes some of Väärä Raha's best-loved songs, and on the strength of their live popularity, it became the label's all-time bestseller. The second album, Yö Rovaniemellä (2012) was elected as the year's best folk music album in Finland and features a broader palette of influences than the debut, as four of the five members now wrote songs. By this time, Väärä Raha could seemingly do no wrong on the stage. The visits abroad had also become regular.

For their third album, Lapland-Balkan, released at the end of 2013, the band changed labels to the much bigger Playground Music. It's their most diverse album to date: the ballads and the tricky Balkan rhythms are there, but so are hints of psychedelia and, for the first time, synthesizers.

The album again got rave reviews, and success on the live circuit is steady. 2014 also brought Jaakko Laitinen & Väärä Raha a taste of German chart success, as they guested on the title track to the band Django 3000's album Bonaparty, which reached number 19 on the German album chart. The song, a co-write between the two groups, originated on a shared gig trip to Archangel in Northern Russia.

New Väärä Raha music is on the way, and as a teaser for WOMEX attendees, there's a new song available, called "Mustikan". Says Laitinen:

“Last summer we only just had this song worked out as we played in Lemmenjoki, Lapland, at a gold diggers' village party. There we were, on top a fell basking in the midnight sun, and suddenly people started flooding in. Mustikan seemed to be the gold diggers' favourite, and we had to play it six times during the evening.”

Jaakko Laitinen & Väärä will play at WOMEX 2015 on October 22 at midnight.

Four great Finnish artists you should get acquainted with – ranging from dreamy and cinematic pop...
Music Finland, 22.9.2020
News / Contemporary & Classical