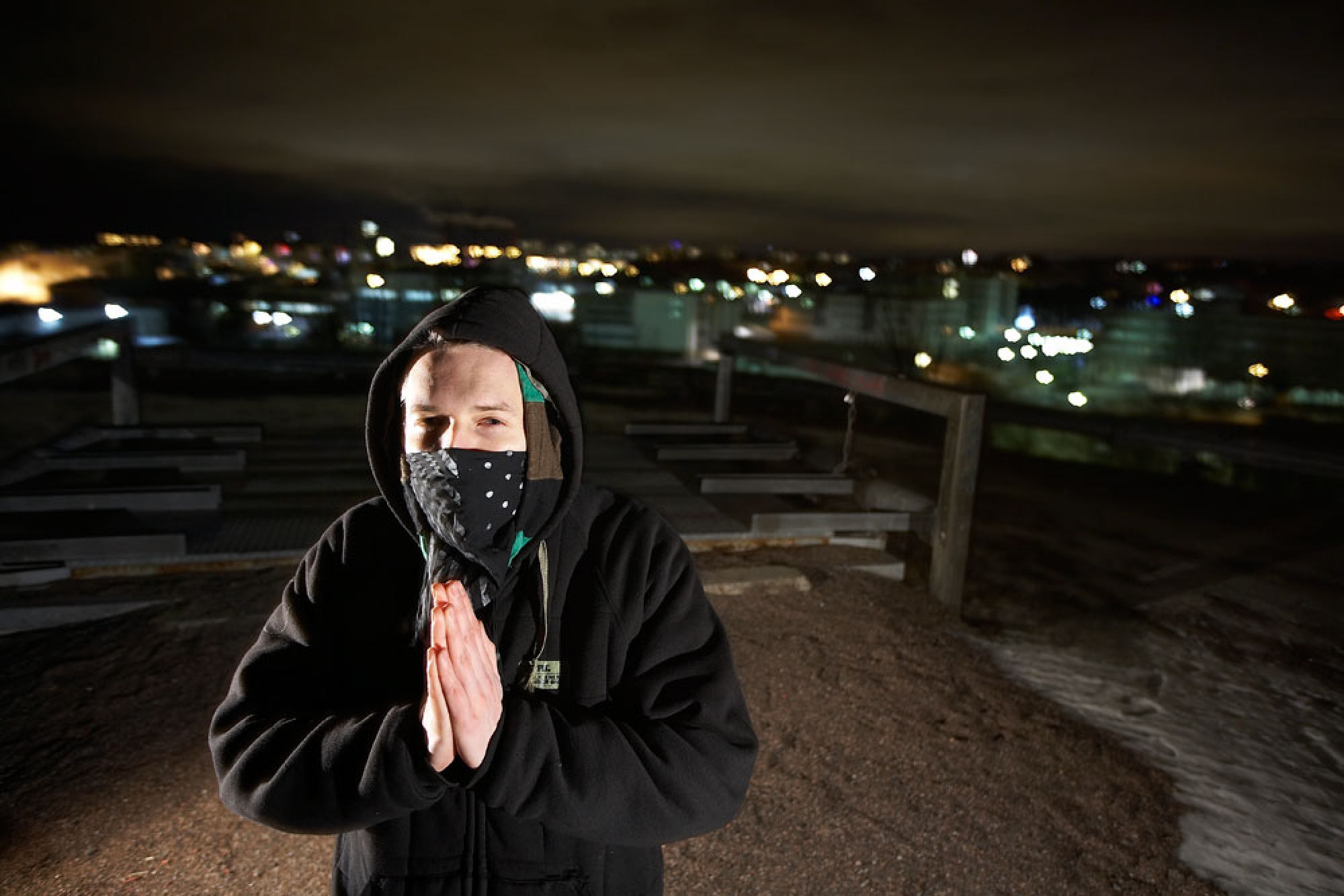 Once upon a time, in two different lands, there were a cotton field and a slash-and-burn field. One was worked by slaves, the other by tenant farmers. Weary workers lightened their lives and the everyday grind through music. In the United States, sweat and tears morphed into the blues, whereas in Finland, the tight rekilaulu songs were shaped by the traditional runo singing and polska forms.

A mighty tree grew from these roots. Uniform culture experienced its rise and fall. The branches sent out shoots. The year 1983 saw the Sibelius Academy establishing its Folk Music Department where traditional instruments were, at the same time, nursed back to life or smashed to smithereens in the name of art.

The first Finnish rap experiments emerged the same year in the recordings of Billy Carson, Kojo and General Njassa. In New York City, the people of the streets were creating a new movement: Zulu Nation’s success made hip hop culture – including music, visual art and lifestyle – into an established art form. Today, in 2013, the blossoms are turning into flowers.

Asa performs under several stage names: Asa Masa, Asama, Avain, Aatsi Pop and Mats Nyckelström. He has been releasing recordings under his various aliases since 2001. “I have never made an attempt to hide behind these names, but sometimes it’s just easier to tell a story or portray a feeling through a persona or character. My different pseudonyms keep filing things in different compartments inside my head – and I didn’t even choose all these names myself,” explains Asa.

His big sister’s music collection included socially conscious rap and, as a child of the MTV era, Asa has been on a steady diet of rap all his life. “At some stage, I got into tagging walls and it was actually graffiti that prompted me to start exploring rap.”

Folk music entered the equation through Asa’s film studies. When Emir Kusturica’s film Black Cat, White Cat first showed in Finland, Asa went to see it. “The roaming rhythm of the Gypsy life and the particular chaos and fury of their brass bands just knocked me off my feet. There is a scene in the film where someone smuggles booze in a flower vase to an old grandpa in hospital. When the old man is discharged, he interrupts the brass band, demanding ‘music and aggression’, and the players begin to blow their brains out. I was immediately hooked.”

Folk music influences are most obvious on the albums released through Asa’s own record company Roihis Musica − Loppuasukas, Via Karelia and Jou jou. Asa started experimenting with folk music by sampling his favourite folk music riffs, but his most recent albums feature Finnish folk musicians as guest artists. His music has references to Sami and Finno-Ugric traditions as well, especially at such times when those minority cultures’ agendas become topical.

Asa describes his own music as punk poetry dressed in rhymes. “It works like a mental springboard to be able to work on any issue whatsoever inside my own head – whether it is an injustice or a positive piece of news – and turn it into a rhyme bicycle. When you pedal away, you create a peaceful place where you get to process the world. If orange snow suddenly started to fall, I know I could live with it as soon as I had turned it into rhymes…”

Nevertheless, there seems to be a certain undertone of protest in all his music. “I prefer to think of it as questioning why the world turns the way it does. I was labelled a political rapper a long time ago. Having never consciously avoided political subject matter, I nevertheless try to find ways not to sound too evangelical. No matter which art form you prefer to use, it always makes sense to discuss our common issues. That is real politics.”

Paleface, aka Karri Miettinen, is already a grand old man of Finnish rap, even though he is barely middleaged. The artist, who has been rapping since he was a child, got his moniker during his student exchange year in the US, being the only white rapper trying to break into the local scene. “But I took the name and ran with it,” he says. Paleface’s first album The Pale Ontologist was released in 2001 and his strong voice was already evident.

In 2010, the esteemed rapper took his fans by surprise by releasing his fourth album in Finnish. As a result his social agenda came across clearly even to non-English speakers, and the audiences responded: Helsinki – Shangri-La went gold in less than a month and nabbed a string of awards ranging from an Emma award for the best male soloist to a nomination as the most notable cultural deed of the year by the left-wing cultural organisation VATAK.

The album’s title song, originally named Perussuomalainen jenkka (True Finns’ jenkka), described in some 30 verses the landslide victory of the True Finns party at the Finnish parliamentary election. “The melody comes straight from the old rekilaulu tradition. The track was initially designed as a clever opener for the album – you buy rap, you hear folk music – but it ended up growing into something bigger.”

“Finnish rap abides by the same rules as, say, rock when it comes to cultural borrowing. The original idea gets copied directly, until someone feels brave enough to bring along their own cultural references. My working process got interrupted by my two-month trip to West Africa. During my time there it became clear that I wanted to make a strong statement about what Finland looked like in 2010.”

Guest artists were invited to collaborate, such as the joik singer Wimme and master folk singer Hilja Grönfors, who has garnered recognition as a collector and performer of Romany songs. “I was on the lookout for a Finnish soul mama with a huge sound. I have a wide musical appetite and at some point I came across Grönfors’ first album. She agreed to sing an old Indian tune to which I had set Finnish words. It was a defining moment!”

The album was followed by a remixed version, and in 2012 Paleface released a new album entitled Maan tapa which further extended his folk music collaborations. An English-language album, Food for the Gods, was released this spring, on which he worked with the Los Angeles rapper Matre. “I am not abandoning either language; they are like two distinct instruments for me.” In addition to English, the album includes lyrics in Arabic and French, and even one of Tanzania’s 120 dialects. “It is pathetic that there are still those in Finland who fail to understand that the most fantastic things are born out of cultural clashes: exceptionally beautiful children, great food and unbelievably fine art, music and culture,” Paleface sums up.

Our blues was played on the kantele

Paleface muses on the influence his music can exert. “Music is invisible, yet it can make a huge impact, and lyrics can really change the world. If we travel back in time to the era before globalisation, the role of a Finnish runo singer or an African griot was to sing about important matters, be it ancient wisdom or timely issues. An MC does exactly that. Rap was called the ‘black CNN’ at a time when African American problems were not covered by the mainstream media. I have learned enormously from those artists who sing about what really matters. I want to pass this on: it makes me happy if a listener becomes educated through my music.”

While telling his own story, Paleface manages to squeeze in an inspiring lecture on the history of black music. He has done his homework in all areas, including folk music. He keeps dropping names and terms, and the journalist keeps updating her ‘to Google’ list.

“Hip hop is rooted in the slave trade. First came the blues, which led to rock, soul and funk, and finally to hip hop. It is important to remember the historical continuum. We white boys have come full circle, from Finland to New York and back, just to realise that our own blues was something that Teppana Jänis played on his kantele a century ago.”

Folk music fiddler Matti Pitkänen, aka Pitkäsen Matti, has just released his debut album Pitkäsen Matti ja Heidän Alhaisuutensa − Nojatuoliblues. His fiddle is still featured, but the strongest focus is on Pitkänen’s self-composed raps. They provide the foundation for his folk music, performed on instruments such as accordion, Jew’s harp and banjo.

Pitkänen has played traditional pelimanni music since he was very young, but he powered through his formal conservatoire education in the classical music stream. He moonlighted as a jazz drummer and spent his youth listening, among others, to Nirvana and rap. He took a six-year break from music during his stint in the peacekeeping forces and also while working as a policeman, until this man of peace was accepted to study folk music at the Sibelius Academy. Rap entered the picture during his student years.

“The most significant thing that happened to my music was perhaps taking a clean break from it. It shaped my view of life and my vision. I want to provoke thoughts, and traditional music just didn’t feel like the right avenue to get my message across.” His life experiences are reflected in songs about a policeman’s work shift or a playboy’s night out. In true do-ityourself style, he has even recorded and mixed half of the material on his album – self-sufficiency seems to be one of the common denominators in folk music and rap.

“In their basic forms, traditional music and rap may not be very similar, but it is easy to combine the two. I see rap as modern-day runo singing.” This summer, Pitkänen will tour as a ‘motor-mouth’, but will also play the violin in the ensembles Yona ja Orkesteri Liikkuvat pilvet and Liljan Loisto, as well as in the Romany ensemble Suora lähetys. His love for Romany music started with klezmer when he was a teenager, and went on to embrace the whole Eastern European music tradition and finally the Gypsy music of Finland.

Does living in a bygone tradition blind you to the present? Folk music is, in a way, a completely non-political genre where the main focus can be on finding the best swing for your polska. Protest songs seem to have become the rappers’ responsibility, even if it is folk music that some of them use as their fuel. On the other hand, labelling any type of music ‘Finnish’ has long been used as a tool to reinforce the idea of a nation state. Historically, however, tradition has been free of any national borders. Its broad spectrum embraces the music of every minority group, tribe and era.

Could the seemingly non-political be political after all? In recent years, nationalists have often sought to use folk music to boost their political agenda – but not so in Finland, where folk music is still characterised by freedom and craziness! No self-respecting nationalist would even consider inviting these avant-garde folk music hippies or minority-music-loving tradition junkies to kill their event. Perhaps the silent rule in folk music is to let all flowers bloom. Politics is not just what goes on in Parliament, but the choices that are made and the life that is lived; the freedom to roll with the polska.

Amanda Kauranne is a folk music student, folk singer and music journalist. Contemporary folk music and Finnish rap predate her by one year.

The article was first published in Finnish Music Quarterly 2/2013.