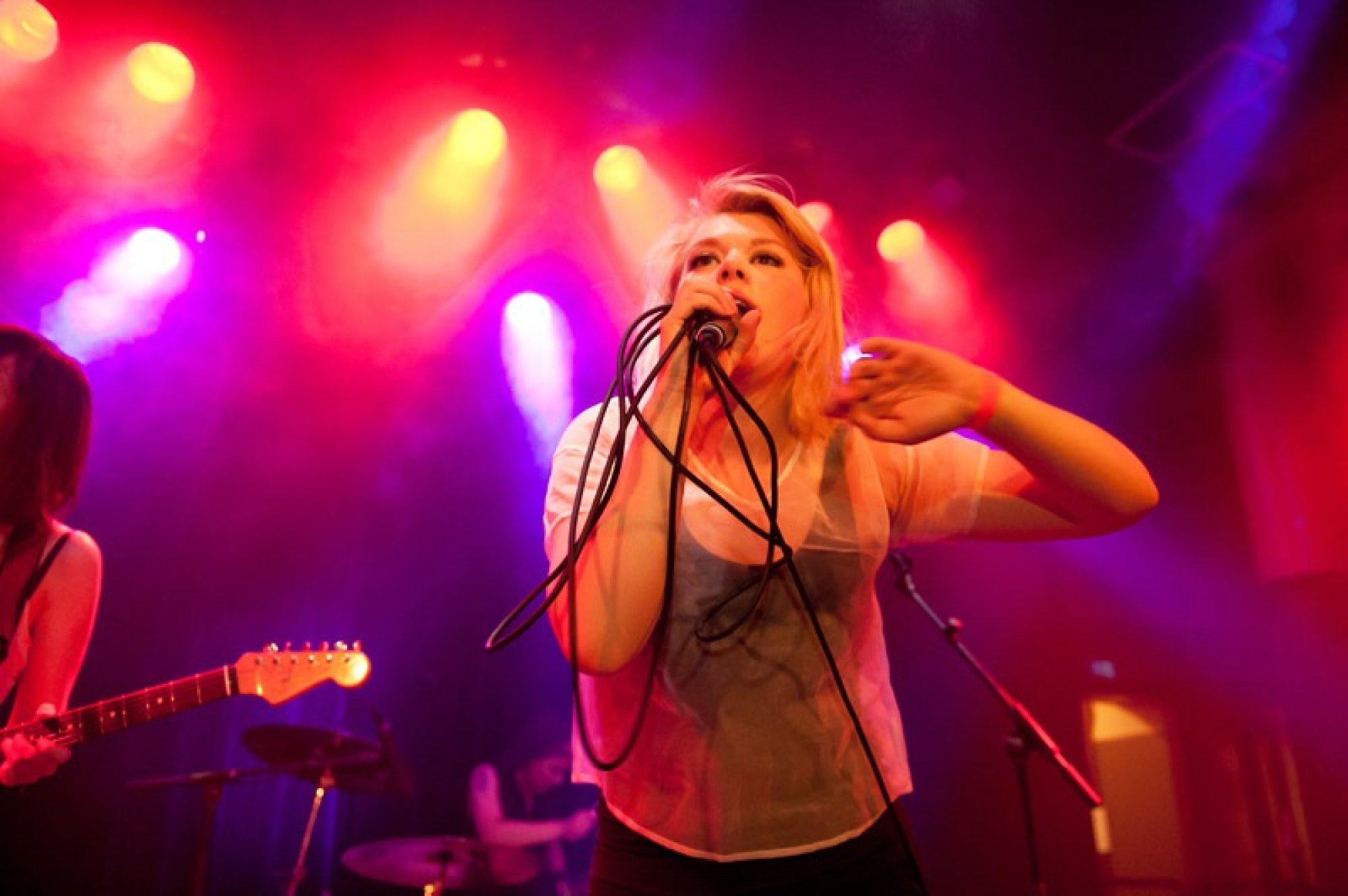 LCMDF started out as three bratty teenage art students doing a smirky send-up of hiphop and electroclash. Six years on, they’re showing (gulp!) maturity and silencing those who called them a one-joke flash in the pan.

Now trimmed down to a sister duo – and their old name Le Corps Mince de Françoise thankfully abbreviated – LCMDF recently returned from their Berlin base to Helsinki for a hometown heroes’ welcome.

Onstage they’re a study in contrasts: guitarist Mia Kemppainen, 22, a shy brunette nearly-motionless in hiking boots while blonde vocalist Emma Kemppainen, 24, bounces around like a Duracell bunny in an aerobics outfit.

For a band known as much for their visuals as their music, their outfits are subdued, far from the brash, in-your-face look of their 2008 debut videos “Cool and Bored”  and “Ray-Ban Glasses”. In those days, they came off as a Nordic female answer to the Beastie Boys, rattling off clever raps interspersed with bits of French and art-school pretention.

The Helsinki show ends with “Beach Life” strummed on an acoustic guitar, the sisters harmonizing as in their early days in Emma’s bedroom – and banishing any lingering doubts that they can really sing.

Emma crouches at the stage’s edge, sharing her mic with a few ecstatic fans who’d sung along throughout the show – including the new songs from their self-released EP, Mental Health, Pt 1.

That EP shows them moving in a more complex, multi-layered direction, with Mia’s electric guitar muscling forward over sitars and found-sound samples of a self-help guru’s sermon. That ties in with a string of self-help inspirational messages they’ve posted on Twitter with headlines like “7 Steps to Happiness”.

Yet another ironic joke? Perhaps not. Mental Health is intended as a concept trilogy of EPs tackling these ideas.

“It has to be intellectual on some level to be interesting,” muses Emma over a cup of tea before the show. “The whole EP series is about self-help and therapy and stuff like that. The first part is quite dark and troubled, about me losing my head, basically all the troubles that can face a 23-year-old. The next one is more about dealing with your issues. It’s going to be poppier, in fact the poppiest thing we’ve ever done: cheesy, almost! And the last one is going to be about enlightenment...well, we’ll see,” she adds, rolling her eyes.

“It seems like everyone my age in Berlin is seeing a life coach or a therapist. Everyone’s fed up with their existence on Facebook and they have all these existential questions. So there’s all this growing interest in new spirituality, yoga and self-help as a reaction to all the irony. People want to find something true and real. We’re not criticising that; just portraying it.”

Musically, she says Mental Health takes its cues from the late ‘90s. Emma credits the heavier sound to her kid sister.

“On Mental Health you can really hear Mia coming in more strongly,” she says. “We wanted to bring in more guitars. She’s more of an art/alternative girl, whereas I’m really a pop hook kind of girl. We’re like yin and yang.”

The catchy pop hooks haven’t disappeared, though, with singles “Paranoia” and “I Go Insane” fastening like earworms. The latter immediately earned a rave review in The Guardian and rotation airplay on BBC Radio 1 – not a bad start for a new label.

Sisters are Doin’ it for Themselves

The duo set up their own company last autumn after bouncing through a succession of labels. They debuted in 2008 with the sarcastic lo-fi single “Cool and Bored”, which had been Emma’s first stab at songwriting a year or two earlier.

“It was partly in French which tied in with our original name, Le Corps Mince de Françoise (‘the skinny body of Françoise’). That was kind of a 17-year-old girl’s self-ironic statement of wanting to be a French supermodel or something,” she says with a giggle. “And at that time, we were into electroclash and French labels like Ed Banger and Kitsuné were really cool.” In 2009, Kitsuné released an LCMDF single mixed by Switch, producer of MIA and Beyoncé.

That year, they performed at the Louvre during Paris Fashion Week and criss-crossed the UK on a NME tour – all heady stuff for teenagers – and for the then-sleepy Finnish indie scene.

“With our energy and sound and look, I feel like we were Finland’s original hipster band,” says Emma. “The whole genre didn’t really exist here before we started.”

There was a delay of a couple of years before the release of their debut album, Love & Nature, recorded at Berlin’s Kaiku Studios with Jonas Verwijnen (Moonface/Siinai, K-X-P, Handsome Furs, Regina).

Though Emma insists she’s “never been inspired by the ‘80s”, the disc featured an 80s-style technopop sound echoing Tom Tom Club, Fab 5 Freddy and, on the hit single “Ghandi” even a keyboard riff from Happy Mondays.

“We’re really inspired by Happy Mondays,” admits Emma, noting that they even got Madchester veteran Andrew Weatherall to remix the song for them.

Now, she says, their new material is firmly “‘90s-inspired, so it’s important that you can see that, too. But it’s still a 2013 version of that look.” Born at art school, the band has always focused on its visuals.

“If you’re a pop band, you should look like a pop band,” says Emma. “You have to be a bit outrageous to stand out from the crowd. Honestly, more Finnish bands should consider their logos and their visual side, promo pictures, their Facebook header and so on.”

That said, she dismisses “art that takes itself too seriously. I love a small level of irony and quirk and fun.”

LCMDF’s design aspects have always toyed with passing microtrends such as seapunk, the absurdist ‘90s nautical look dragged into the mainstream by the likes of Azealia Banks and Rihanna.

“I love seapunk; it’s way quirkier than the basic hipster apparel. We’ve used elements of it, like we were dip-dyeing our hair back in 2011. But now our visuals are kind of on the next level from that.”

Helping to shape their visuals is ex-keyboard player Malin Nyqvist, who directed the beige-themed “Paranoia” video.

“We went to school with her all the way from kindergarten up to art school, and we’re still best friends,” explains Emma. “She just decided that being in the band wasn’t what she wanted to do with her life.”

At the duo’s recent Helsinki show – beefed up by a live drummer – Nyqvist DJ’d between sets and then gleefully danced in the crowd as her old mates tore it up onstage, singing along without a mic.

LCMDF’s first single from Mental Health, Pt. 2 drops around April 1. In the meantime those buying a ticket in advance for their London show on 21 February will receive a free 7" single featuring LCMDF and Jaakko Eino Kalevi.